I was hooked up to a broken EKG machine during my heart attack! 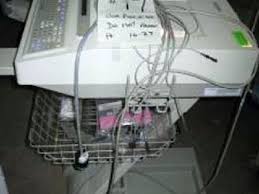 Dateline Santa Maria: This is L.B.’s story, corroborated by her daughter.

“I am a 50-year-old woman with a history of hypertension. In the last 2 years at Santa Maria, I have struggled with Medical to get my blood pressure under control. My everyday range, with medication, is 188-195 over 92-114.

In 2014 I had a full hysterectomy which exacerbated my blood pressure because of lack of estrogen. I was prescribed estrogen following surgery. Recently, I was running out and was unable to get more, even though the Rx showed approved refills. The computer system would not renew it. [See story about the outdated computer system here.]

While I was waiting for the computer to release my estrogen Rx, the provider substituted clonidine, an anti-hypertensive used to curb hot flashes. This drug has a “rebound” effect and stopping it increases blood pressure.

After 4 days without proper meds, I felt my cheeks turn numb, and my chest felt like an elephant was sitting on it. I was at work in the education room when I rose to get help. My daughter saw me clutch my chest and left arm as I collapsed on the floor.

When I woke up I was hooked up to a machine and oxygen was being administered. I recall a nurse on the phone telling someone “Yes, she is in tachycardia, and her oxygen level is 60.” When the provider saw that, he cranked up the O2 machine to max. At some point, I remember throwing up.

Mr. R (the provider) looked at my EKG tape and concluded I was NOT having a heart attack. He told me this episode was probably just stress and anxiety, combined with being without estrogen. I was prescribed an anti-nausea pill and 3-days bed rest.

In the seven days after this event, medical never once followed up to take my blood pressure. Another week went by, still with no blood pressure monitoring. I confronted Mr. R on his way home on a Friday and he told me that he’d left instructions for B/P reading and to go tell the nurse to take my reading throughout the weekend. Not only was my B/P dangerously high, but my resting heart rate was in the 112-137 range.

When I finally saw Mr. R again, we reviewed the EKG tapes from August 27 and noticed that the tape had “LV5 error – normal” printed on it. So he had me tested again, even though I felt no symptoms. The EKG spit out another LV5 error. Mr.R googled it and learned that it indicates “connections or leads damaged or broken.”

He yelled for Nurse F, who actually laughed and said, “Oh, that old thing doesn’t work. It’s busted. The new EKG machine is still in the box.” The staff had no idea they had been using a broken machine.

I have 5 more years before my release date, but I think they will kill me before then.”